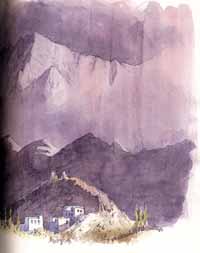 In June/July 2004 we took 12 painters on a painting holiday to Ladakh in India . It is known as Little Tibet and is part of the Himalayas but unlike Nepal it is high altitude desert. It is very dry and dusty with patches of green where the river Indus is used to irrigate fields, and in some of the valleys where glacier melt water provides irrigation.
The combination of snow capped peaks, warm colour, desert-like hillsides and verdant patches of cultivated land, with ancient buddhist monasteries perched on rocky crags provided us with fantastic sketching subjects. 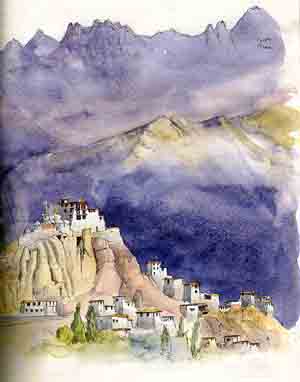 We can’t wait to find time to turn more of them into paintings. The people were kind and friendly and many of them wear their traditional costumes on a daily basis so they also provided us with plenty of sketching opportunities. Their way of life is, of course, disappearing fast with the onslaught of tourism but there are several NGO’s working to preserve the culture and customs, so we can but hope. We feel very privileged to have been there.
___________________ 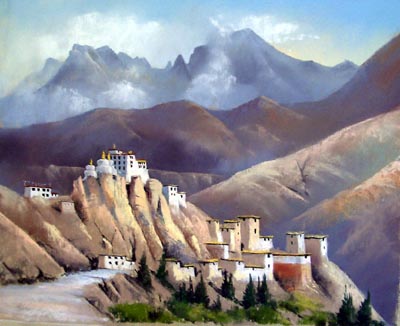 Lamayuru, pastel from the sketch on the right by Jenny Keal 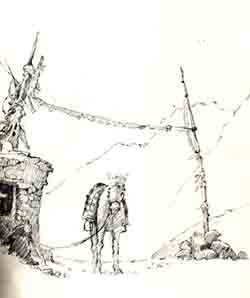 ________________
There were two treks and we rafted down the Indus River, losing two of the group overboard in wild water. As Hazel was swept off down the rapids, fending off the rocks with her paddle, our raft became jammed in the boulders. Happily she was picked up by the second raft and was none the worse for her dip. David did, however, berate her for not sketching as she floated away. 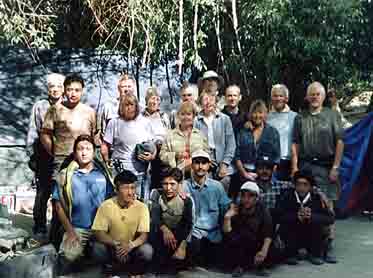 The group including guides and porters
at Lamayuru