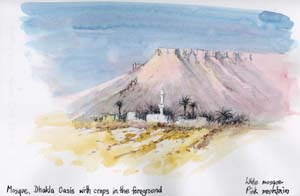 Dhakla Mosque sketch by David Bellamy
On we went, sometimes on the road, sometimes short-cutting across the desert, charging towards a beautiful lake with mountains, waving palms, feluccas and maidens bathing. Sadly all this turned out to be a mirage, but I sketched it anyway! It was sunset-time as we reached Dhakla Oasis, the old qasr looking stunning in the rosy evening light with pink mountains rising above. Here we had two nights in a hotel before launching off on the real expedition part of the trip. In the morning Jenny caught up with her journal and I went sketching with one of the others. Later we explored the old town, but need to return to really do it justice. The people were so friendly and hospitable.

Our start into the desert next day was farcical. For 4 hours we were delayed as there was something wrong with the permits. Eventually we got going, with Mohammed, an Egyptian Army officer with us, bringing our total up to 27 people. At least Saeed, who was the mechanic for the trip, spent the delay fruitfully by repairing the leaf springs of his vehicle with a splint made of a couple of bits of wood held on with some string. We hoped it would survive the coming knocks….. It was a great relief to get out into the desert. No roads, buildings or anything until Siwa Oasis hundreds of miles to the north. We continued south-west, camping night after night, and being heartily entertained by the guides, drivers and cooks with their music and unique style of contorted dancing which often included a spade or the front

bumper of a wagon as a partner. Ashraf the deputy cook was quite outstanding dancing with the spade. They couldn’t do enough for us. To wash we had a small water spray and wet wipes – the alternative was to roll in the sand and hope you wouldn’t bump into any snakes or scorpions. From early on we kept filling our bags with rocks of amazing shapes and at one point came upon a ‘herd’ of yardangs, strange walrus-shaped mud-type rocks as big as a walrus but without the tusks.

We were now in an area much used by the Long Range Desert Group during World War II, and much evidence still remains, mainly of 4-gallon petrol tins. At Eight Bells we came to an old airstrip – the sand is so flat and hard it makes a good runway. That night it was dark as we drove on to find a campsite, mindful that if we went too far we might run into a minefield – not terribly sensible in the dark. The next morning we examined our campsite, having erected everything in the dark. The desert was absolutely flat all round, and my first concern was where do I go for a loo visit in such an unprivate place? These things are pretty fundamental in these situations. I had to walk half a mile until I found a few rocks…then relief! Eventually we crossed the border into Sudan, hoping we wouldn’t bump into any patrols, and set up camp in Karkhur Talh, a beautiful valley with acacia trees, but still as dry as a bone, with only scrub as ground vegetation. Here we sketched for some time and studied the many examples of rock art in the cliffs: giraffes, gazelle, people, cattle, aliens with funny things on their heads, and much more. In the evening we danced and the music blared so loud it’s a wonder all the border patrols for miles didn’t hear us.