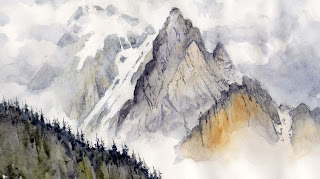 Including figures in a landscape painting is one of the most basic ways of suggesting a sense of scale, but in a vast landscape where do you position them, and how large should they be? These can be critical decisions for the artist, especially as figures tend to immediately attract the eye of the viewer. They therefore become the focal point. 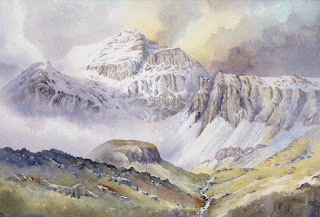 In this large watercolour of Gyrn Las in Snowdonia the two figures are barely discernible in such a small reproduction. They are actually standing at the top of the small stream descending to the right of centre in the lower part of the composition. Even in the original they are not obvious, but once you know they are there they impart a feeling of being completely dwarfed in an immense landscape. They could not have been painted much smaller without completely losing them, but had they been made much larger the scene would appear a great deal smaller.

This watercolour, and many other works can be seen in the Autumn/Winter exhibition “Harmony” at Boundary Art, Cardiff’s newest art space, where you can enjoy a Chinese tea while contemplating the exhibits which range from traditional to contemporary paintings in oil and watercolour by many artists. The exhibition runs from Saturday 14th November to 31st December. Boundary Art is at 3 Sovereign Quay, Havannah Street in Cardiff Bay, CF10 5SF  Tel. 02920 489869  Check out the website at http://www.boundaryart.com

Like boy scouts, we should always be well prepared as artists, for those moments when the weather and atmosphere create stunning effects that we simply cannot ignore. This means not just carrying sketchbook and camera around with us when we’re in the great outdoors, but being ready to venture out at short notice when a little seasonal magic appears. At this time of year I’m always aware that snow may well fall at any time on the hills and mountains, and if this coincides with those flaming autumn colours we have stunning possibilities for superb landscape paintings, so keep an eye on them there hills!

In this watercolour of the Applecross Mountains the contrast in colour temperature between the foreground and the background is striking. You can, of course beef up the warm colours well into winter if you don’t want your compositions to appear to cold overall. In this painting, which you will find on a larger scale in my book Winter Landscapes in Watercolour, the mountain details have been rendered in cool blues, apart from where the low sunlight is catching the higher parts. In the sunlit features I dropped in a touch of light red while the dark crags were still wet, and this also helps to place more emphasis on certain parts of the scene.

During the change of seasons be ready for this effect and look out for it in your local landscapes. Be prepared to move around to set those lively warm colours against the cool mountains and snow. It will really bring your work to life.

There are still places left on my seminar in Pontypool on Saturday 1st November, on painting winter landscapes in watercolour, and it includes a full demonstration and an illustrated talk on creating exciting winter scenes, with a great many examples of different types of landscape. It is aimed at preparing you for painting the winter landscape both indoors and outdoors, and making the most of this fascinating season. Check it out on my website. In the meantime, enjoy your painting! 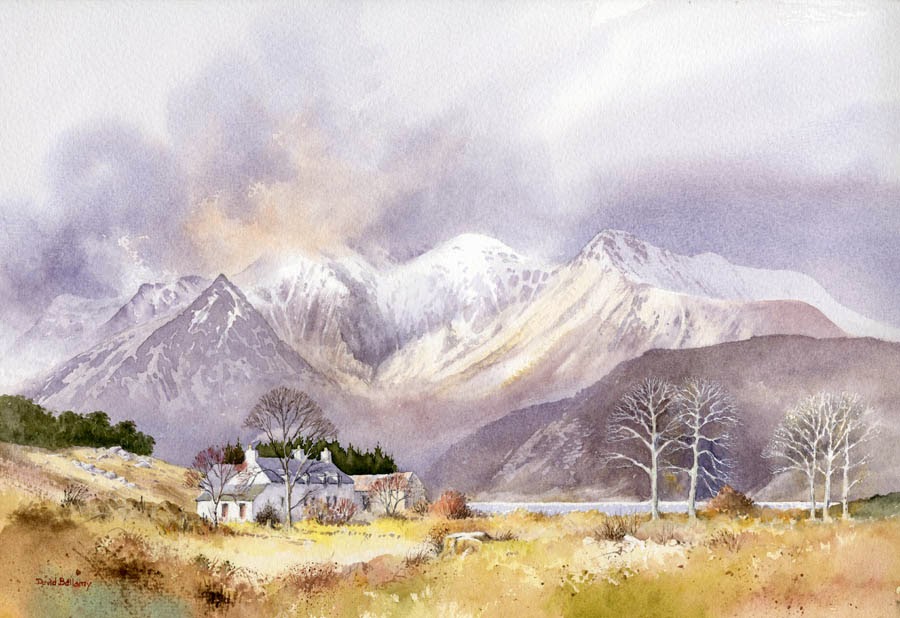 I’ve not long returned from a trip to the Canadian Rockies, where the mountains rise high in truly awesome splendour. I managed around a hundred sketches, many in watercolour, and the hot, sunny weather made it really a pleasure to be out sketching. Luckily I had some bad-weather days as well, even some snowfall, and this gave my work that added atmosphere: when you can see everything there is no mystery. 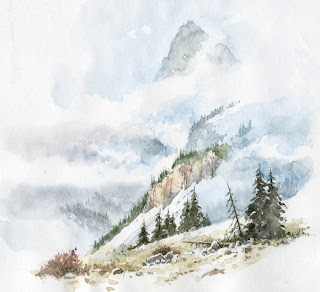 This watercolour of Stoney Squaw Mountain near Banff was done on a cartridge sketchbook, showing fresh snow and wreaths of mist, which many find difficult to tackle. If you use copious amounts of water and keep your edges soft (sometimes you need to soften edges that have dried hard with a damp brush). Obviously experience with the wet-into-wet technique helps here, and you may well need to re-wet some areas to create misty shapes of crags, trees and ridges.

One of the great advantages of the colour sketch over a photograph in a situation like this is that you usually find the camera will record simply stark contrasts of dark rock and white snow, losing any sense of colour, unless strong light is highlighting  any colour. When sketching, observe carefully any colour present in rocks and vegetation, even exaggerating it if necessary, to avoid the work looking too cold or sombre.

I can’t wait to get going on some enormous compositions of the Canadian scenes.