Last Saturday I had my first chance this winter season to get up into the snow-bound mountains. It was lashing with rain, very cold and windy when I set off from home, to the accompaniment of comments which made several references to ‘lunacy.’ Aha! By the time I reached the Black Mountains the sky appeared even more ferocious, more threatening, the clouds snow-laden and scudding fast, now and then leaving a gap through which some peak was revealed. 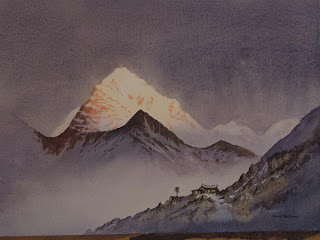 As I geared myself up I barely gave the mountain ridge to the east a second glance. It looked dull and unpromising and I’d seen it in much better light. Hardly had I gone 300 metres when it suddenly exploded into a feast of light and cloud. Gone was the dullness. Within seconds it had become an amazing sight that reminded me of Tangi Ragi Tau, the Himalayan peak I’d painted several years ago, and shown above. I couldn’t see the topmost part of the ridge because of cloud, but this added to the mysterious immensity that offered itself as my first sketching subject.

The rain had gone, but the wind was vicious. I managed several sketches that afternoon, climbing high into the snow and revelling in the beauty all around. The sketch, the photograph and the finished painting will appear in publication in due course, but the lesson of all this is that however familiar you are with a subject, however many times you’ve seen it, the moment the atmosphere starts to let off fireworks like this you need your sketchbook and your camera.

I wish all my followers a Happy and peaceful Christmas, and may 2012 be your best ever!