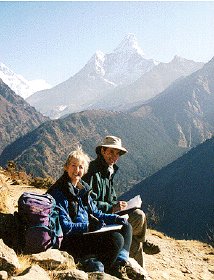 David and Jenny took a group of 15 painters on a painting and trekking holiday to Nepal in November 2000.

There were two ten day treks, the first in the Annapurna region and the second up the Kumbu Valley to see Everest. A truly memorable and life enhancing experience. 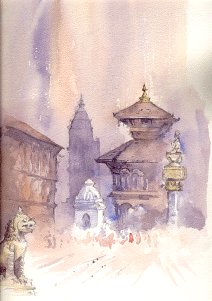 We began our journey in Katmandu where the sights and sounds were strange and exotic. It is a big city, sprawling across the valley between the mountains; half finished buildings and general chaos make it difficult to tell what is old and what is new. Add the bustle noise, dust and pollution, rotting food in the gutters, the seething mass of people in colourful clothing, sacred cows sauntering in the middle of the main thoroughfares; and yet one cannot help but find it fascinating. Durbar square is in the heart of Patan, the artist area of Katmandu. We sat on the steps of a temple and sketched whilst a group of local schoolboys peered over our shoulders as fascinated by us as we were
by them. 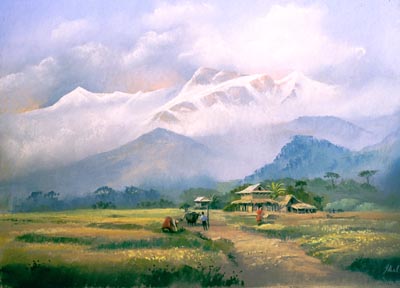 Our trek around the Annapurna region introduced us to the village life of
rural Nepal. The villages are almost self sufficient in food and the hillsides are terraced and irrigated to optimise the arable land. Everything is made use of; in Tarkaghat we saw two men making a rough rope from straw by twisting both ends of a big bundle until it formed a cord. 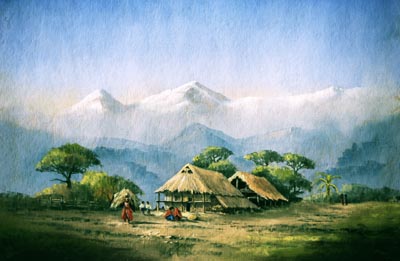 This was then used to tie a huge bundle of straw together to be carried
on the backs of the younger people. The cattle are kept off the crops
by the children, there being no fences around the fields. Sometimes
the cattle had little baskets tied over their muzzles to stop them chomping
on the millet or rice growing on the terraces. 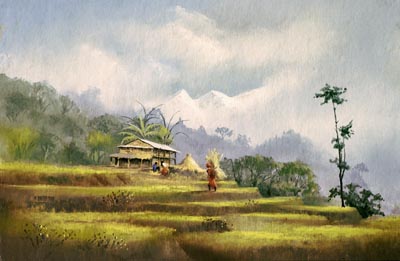 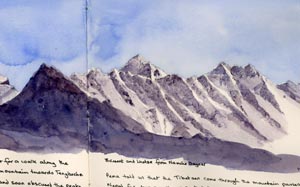 sketch of Everest from Jenny’s journal showing the frozen washes

The second trek was up the KhumbuValley to Namche Bazaar with the hope of seeing Everest. We had intended to reach Tyangboche but a couple of our group had mild altitude sickness and we deemed it wise to stay in Namche for an extra night to give them time to aclimitise. Early one morning we climbed the small hill at the back of our campsite to get our first view of Everest. Most days it disappeared into the clouds by midday so an early start was essential. It was so cold that the washes froze on page. 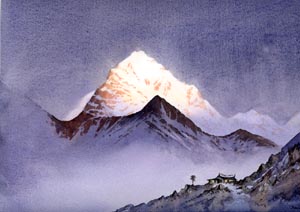 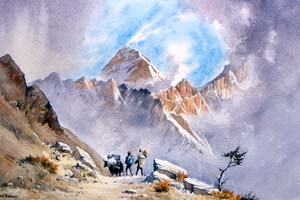 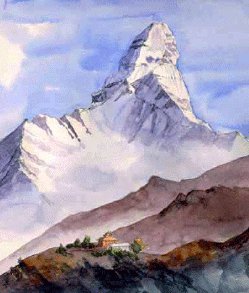 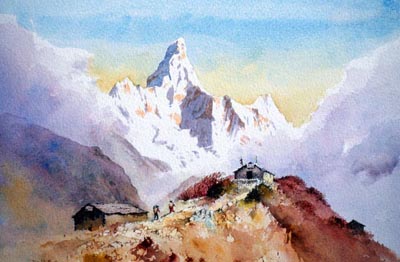 We managed to get as far as Monla village from where we had a wonderful
view of Tyangboche Monastery across the valley with Ama Dablam in the
background. The mountain that made the greatest impression on David and Jenny was not, as expected Everest but Ama Dablam. It’s elegant shape and dominating presence at the head of the Khumbu valley has made
them both paint it again and again. They never tire of it. 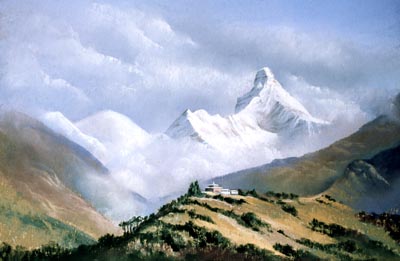