I’ve been away in south-east England last week, and for two of the days working on the stage-by-stage paintings for my next book, Winter Landscapes in Watercolour at the Search Press studio. One of those awkward little problems facing the watercolourist is when you need to include small spots or lines of white in a scene, a particular necessity with snow subjects. 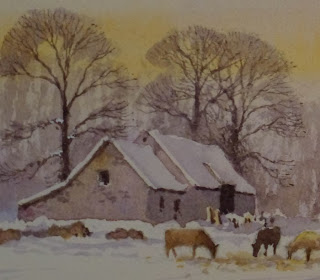 You can try masking fluid, but this often induces larger blobs than you want and can sometimes look wrong when it is rubbed off. Scratching with a scalpel is another method, and this can be very effective, though not everyone is confident with using one. In this scene showing part of a painting I have painted on white gouache where I wanted patches of snow on the upper side of branches close to the trunk, where they tend to remain longer as there is less motion in that part of the branch. I’ve also dabbed some on the window sill of the barn. The roofs were left white, and you can see that because the sun is so low the tops of the roofs are slightly darker in shadow than the strips at the end where the snow is quite thick. I often use white gouache for tiny areas like the branches and sills.

The book will be published by Search Press in September, and will be accompanied by a DVD from APV Films. As well as winter landscapes it will cover late autumn to early spring, covering a wide variety of scenery and techniques. It is the third in the series, following Mountains & Moorlands in Watercolour and Skies, Light & Atmosphere in Watercolour, both of which are available on my website

2 thoughts on “Creating small flecks of white in your watercolours”