It’s always a great pleasure when someone famous acquires one of your paintings, and especially so when he is such a great guy with a marvellous sense of humour. Last week Jenny and I were in Cambridge for the presentation of one of my watercolours to best-selling author Bill Bryson by the Outdoor Writers & Photographers’ Guild at the prestigious Scott Polar Research Institute. The event was organised to present Bill with the Golden Eagle Award, presented annually by the guild to someone who has given outstanding service to the great outdoors. As president of the Campaign for the Protection of Rural England Bill has been doing sterling work, especially in his Stop the Drop campaign against litter. 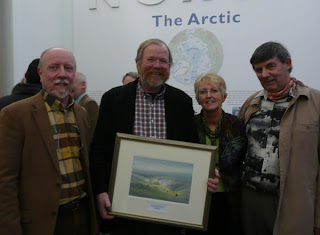 The photograph shows Bill holding the painting with OWPG president Roly Smith on his right and Jenny on his left, while I lounge on Jenny’s left. Others who have received the award over past years include Sir Chris Bonington, Doug Scott and Sir David Attenborough. The painting is always some wild location and has to feature a golden eagle flying across the scene. I once perched high on a cliff in the highlands disguised as a sprig of heather, waiting for an eagle to return to its nest some distance away, but after several hours all I got was a load of ants and vegetation down the back of my neck! On returning to sea level I looked up and saw a pair of eagles hovering over my earlier hideout.