For a number of years I have been president of Powys Area Ramblers – part of the Ramblers’ Association, which I joined over 20 years ago. It has given me great pleasure supporting a charity that does such marvellous work keeping so many of our footpaths open, and at the same time campaigning on behalf of the countryside, although I tended not to walk with them as my rather odd habit of continually chasing sketches meant that we quickly lost each other…… 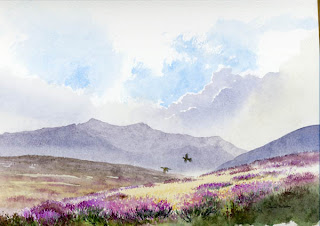 Of late, though, things have sadly gone awry in the Welsh Ramblers, with the Welsh RA hierarchy co-opting a controversial new Welsh president in a secretive and what some members feel to be an unconstitutional manner, as it should have been done at an AGM. The new president is Jane Davidson, a former minister within the Welsh Assembly who has been encouraging the building of massed wind turbines across Mid-Wales, industrialising it so much that if most developments proceed there will hardly be a single view without these massive, out-of-scale turbines present. Last autumn, following rumours, I warned Welsh RA that such an appointment would be both controversial and damaging to the RA.

As far as I know, most members of the RA in Wales are not aware of the arrogant manner in which this decision was carried out, and already some are concerned that they may be unable to protest against wind turbines because of the president’s stance. This, of course is not true, but illustrates the potentially invidious effect of having a politician involved in a democratic society.

So sadly I have resigned my position as president of Powys Ramblers. They are a great bunch and I wish them well, but they, and others deserve a far better hierarchy at Welsh HQ than the present incumbents.

The watercolour shows typical Mid-wales scenery that will become industrialised before long if the controversial plans go ahead. How soon before this becomes an artistic no-go area?

1 thought on “Rambling on in Mid-Wales”