Today I’ve invited Griswallt ap Llechitwyt, author of ‘The Grog Invasion’ and an authority on the legendary Welsh water-folk, the Llandoddies, to regale us with a rare insight into these fascinating creatures. Grissie, as he is affectionately called, lives somewhere in the heart of the Cambrian Mountains, a recluse who makes occasional forays into the 21st century and has a further Llandoddie book in preparation. 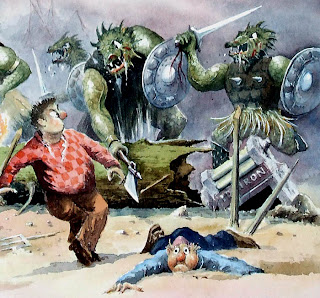 My involvement with the Doddies, or Llandoddies, as they come from Llandrindod Wells, goes back to the time when I first learned about the Battle of Aberdod. So amazing was the story of these legendary folk, I just had to put it down on paper. The picture illustrates a scene from the battle, which occurred on St Cewydd’s Day in 1913, St Cewydd being the patron saint of rain. Here you can see the sense of despair on the faces of the little Doddies as they are being overwhelmed by the villainous Grogs who are intent on putting the Doddies to the sword, stealing their cakes and also the Doddie ladies who bake them.

How can they possibly survive against such odds? Well, all is revealed in The Grog Invasion which you can get from http://www.davidbellamy.co.uk  Should you visit Llandrindod, or Llandod as it is known locally, be sure to look out for all the Doddie sculptures around the place: in the Rock Park, beside the lake and in the woods. Powys County Council are organising a Llandoddie walk this summer, and who knows, you might well come across one of the little folk if you are quiet, but beware of any Grogs that might lurk in the undergrowth!

The second book in the series, Terror of the Trolls, is currently being written, but because much of the action takes place underground in the Rock Park it has not been easy to dig out the incredibly awful tale of these monsters from Howey, but for those who have read the first book you may be reassured that many of your old favourite characters make an appearance. I’ll be back with more news before long.