The natural environment has always been close to my heart, and I was lucky enough to be born and brought up in a rural idyll in Wales. Walking and painting in this stunningly beautiful countryside has heightened my awareness of what we are about to lose if the British government’s plans for the industrialisation of most of Mid-Wales with gigantic wind turbines goes ahead. This is not confined to Mid-Wales, and the devastating effects on a hitherto unprecedented scale will most certainly not be limited to just the destruction of this glorious landscape, but has cataclysmic consequences for the local population. 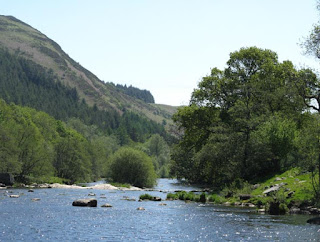 Tourism is the lifeblood of our region, but how many tourists will come to see hills and moors flooded with wind turbines, completely dwarfing every other feature in the landscape? The local economy will be destroyed and a great many small businesses, including artists and crafts-people, will fold up. The authorities tell us that there will be around seven years of over-size, slow-moving convoys carrying turbines, clagging up our roads, needing new bridges, re-aligned bends and demolished street furniture, while at the same time under-mining old buildings beside the roads: visitors, locals and emergency services will be badly affected. Turbines, despite government ‘reassurances’, create an insidious low-frequency noise that many people simply cannot live with, and some have to abandon their homes. Many homes become unsellable. Most have their value reduced considerably. Turbines explode and catch fire at times, when they become highly dangerous as they emit toxic fumes over a wide area. A report in Scotland states that for every wind energy job created 3.7 jobs are lost.

Would all this sacrifice be acceptable if wind energy was an effective energy system? This is rather academic, as wind, given its intermittency, produces such little power and needs so much back-up from conventional power stations that large-scale wind farms can only be seen as a great liability. It is, however, an extremely effective source of income for the developers, for energy corporations (most of whom are foreign and therefore making a joke of government policy), for large land-owners and for many politicians. At the expense of local people, many on the poverty line.

We now know in Wales what the West means when it insists on democracy created at the point of a rifle: it does not exist here, in its acceptable form, and unless this vindictive assault on our communities and countryside is not stopped, before long there won’t be a landscape here for us to paint. See also National Opposition to Windfarms     Artists Against Windfarms

4 thoughts on “Twilight of the Welsh countryside”