The onset of spring nearly always gives us all a sense of hopeful anticipation of more pleasing times to come, perhaps more so this year than ever before as we attempt to recover from this dreadful virus. I hope you are able to get outside and take advantage of the better days, and perhaps manage a sketch or two. For me, daffodils always make a powerful foreground feature, and it’s worth capturing some images of these while you are out.

This image is part of a painting depicting lambs in early spring. Sheep are relatively easy to draw, but can pose problems for the unwary at the painting stage, especially where you have a light-coloured field caught in sunshine: you need a slightly darker area behind the sheep so that it stands out, and as you can see in this painting I have included several darker patches of grass in order to highlight the sheep. Generally I use Naples yellow for the main body, often leave a white top on head and body to accentuate the sense of light. This is normally left as white paper, but touching in a little white gouache can help rescue one that has not quite worked.

When including lambs it is important to put across a sense of the relationship between mother and lamb, or between a number of lambs enjoying each other’s company. This makes it look so much more natural. Compare the lamb by its mother in the foreground with the one on the distant right which is lying on it’s own. The closer couple invoke a much more pleasing composition.

One of the stronger background features is the gate. Although this has nothing to do with springtime I mention it because it is a good example of negative painting. Here, I have worked the darker colour around the gate and posts to define the light woodwork. I never include all five or so bars as it’s good to keep some hidden in the long grass! The painting was done on Saunders Waterford NOT 140lb paper.

Enjoy springtime, and you can find more help on seasonal work in my book Landscapes Through the Seasons in Watercolour, which you can obtain as a signed copy from my website www.davidbellamy.co.uk

This is a lovely time of year in the British countryside: the lanes are rife with daffodils around us, blossom is appearing, the hawthorn is already budding in profusion and lambs are chasing each other across the fields. With week after week of glorious sunshine it’s been a great time to get out sketching, and as you can glean so much from engaging the locals I stop to chat whenever I can. The previous weekend I met a farmer who simply wouldn’t stop talking.

“Had triplets last night,” he said, matter-of-factly.
“Really?” I half-queried, trying to keep a straight face.
“Trouble is, only got two t-ts.”  I raised my eyebrows, unsure of who or what he was describing.
“But I got the old ewe to give one away, with a bit of persuading.” At this point I felt we were probably discussing the problems of the mother sheep, and turned to my sketchbook. 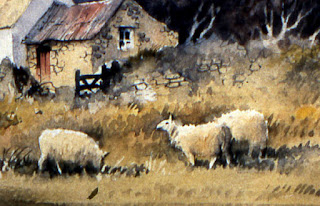 Sheep can add life to a scene and are not that difficult to draw. I rarely give them four legs as it can appear over-crowded in a painting: three is quite sufficient. I sometimes give white-faced ones a black head to make them stand out, otherwise paint in a darker tone around them as I’ve done in this part of a watercolour composition. When out I do photograph them, but enjoy drawing them as it can usually convey a better sense of movement and dynamism – not that the sheep is especially dynamic!
This weekend I was again out on the hills when several sheepdogs raced into view around the sheep. Quickly I reached for my pencil as the farmer drove into sight in his land-rover. Alas, the dogs were ignoring the sheep, and simply hurtling past. I had hoped to get an interesting round-up scene. Even the farmer didn’t stop, just hurtled past with a wave, so I missed that one. You can’t win them all, I guess, but you have to keep trying. It’s all part of the fun…….