It’s never easy to resist that marvellous detail out there, even on distant mountains, and perhaps it does seem a shame not to include at least some of it. Don’t forget, however, that we are not trying to create a scene with photographic adherence to detail. If you can see it, that doesn’t mean you must put it in – if you come along another day the scene could be quite different, with atmosphere hiding all that detail! 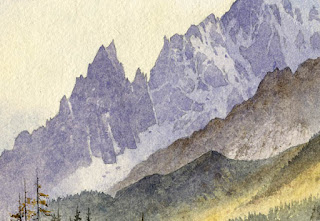 This inset shows just a small part of an alpine watercolour. When I did the original sketch I could see much more detail on each of the ridges, and also more colour variation in the closer ones. With the far jagged mountain ridge I  picked out the most striking gullies, buttresses and crags and left out the others. With each ridge the highest part is a little darker in tone than its lower parts, a phenomenon that is not only present, but helps to ensure that with several such ridges we are not going to end up with extremely dark tones.

This painting is in an exhibition I have just started at the Erwood Station Crafts Centre just a few miles south of Builth Wells, just off the A470. It also features the stunning sculptures of Glenn Morris. A week ago I had no idea that this was going to happen, but an artist let down the gallery at the last minute, so Glenn and I were asked to step in. The exhibition is on daily and the centre is a marvellous place to stop for refreshments when travelling through Mid Wales. Telephone 01982 560674