A belated Happy New Year to you all, and thank you so much to all of you who sent good wishes over Christmas. The Festive period was a bit of a blur this year, having to be in so many places, the highlight being taking little Gwinny to see her Mum performing in Cinderella in East Grinstead. Those Ugly Sisters seem to get worse every time I see them!

I love creating something of a narrative in a painting, and this is something well worth thinking about when you are working on a wildlife composition. After many visits to the Arctic polar bears have become a favourite subject of mine, combining a magnificent creature with stunningly dramatic scenery.

In this watercolour my aim was to put across the studied interaction between bear and bird. There were many gulls around, watching the bear with concern, and this one appears to be just a little too close for comfort, although it was some distance away. The gull is keeping a beady eye on the animal, while the bear attempts to look uninterested, yet ready to pounce when she spots a drop in the guard of the gull. These were magical moments watching these creatures play out their deadly game against a backdrop of savage glacier scenery. I’ve only suggested the background so that emphasis is placed on the antagonists, fading the glacial detail out as it goes behind the bear, and keeping the colours muted.

If you wish to see the original it’s hanging in Beaulieu Fine Arts on the edge of the New Forest in Hampshire, tel. 01590 612089   www.beaulieufinearts.co.uk

Enjoy your painting in 2020 and try to get yourself well prepared early on for those artistic sojourns in search of new subjects. I shall shortly be off in search of some decent snow.

I will be giving a talk and demonstration at The Galtres Centre, in the Market Place at Easingwold on Friday 26th April, and you are welcome to come and have a chat. The theme will be “Wild Serengeti” and I will be covering encounters and sketching with African wildlife. The event starts at 7.30 pm and for those using satnav the postcode is YO61 3AD. For tickets and information please ring the Galtres Centre on 01347 822472

The scene shows wildebeeste startled by a lion during the annual pilgrimage across the Serengeti, when the line of wildebeeste runs from one end of the horizon to the other. The lion watched them with indifference, probably having eaten so many he couldn’t face any more for a while! I enjoy working on a narrative like this, where there is more than just the visual image. To make the main animals stand out I deliberately simplified the ground directly behind them. Fast movement is depicted not just by blurring the legs slightly and placing them in running positions, but also by the angle and attitude of the body. This is at its clearest in the two beasts 3rd and 4th from the left, where they are moving away from the viewer and their bodies are slightly leaning over to the left as they turn away.
The painting was done on Saunders Waterford 140lb rough paper.

Some folk may wonder why I don’t use Facebook, even though there is an account in my name (which I don’t use). I find it almost impossible as I live quite an action-packed life with little time to spare – in fact I don’t paint so often these days because 21st-century life just is too demanding of one’s time. Technology is supposed to make life easier for us, but I find it just adds an extra burden, being so incredibly slow and error-prone. It’s much greater fun to be out in the wilds or at least brandishing the old-fashioned paintbrush somewhere nice and remote.

Here in Mid-Wales it’s been a really gloomy start to the new year, and that’s not just the weather – confrontations at Llandegley between many protesters and the wind-turbine developers escalated when they began delivering concrete. It really shows the amazing commitment to saving the planet by these truck-drivers in having to rise about 1am to drive down from Yorkshire, about 150 miles, to shatter the sleep of the locals before 5am. Somewhat unfairly, the developers do not seem to have told them that these turbines will not be connected to anything, as there is no connection to the grid! Apparently so long as they look OK this doesn’t matter, and they will still get their millions so long as one of the seven turbines is standing up by 31st January. They have brought a large generator along, probably just to make sure the little thingie at the top goes round and round anyway.

Many security staff had been drafted in, but the protesters held their ground. The trucks stood still. At first the police present were unsure about the legal situation, as this was on common land where we had every right to wander around, sketch, watch birds, have a picnic, etc, but in the end the issue was resolved by protesters walking slowly in front of the trucks at less that funereal pace. The security staff tried to bully some out of the way. One elderly lady slipped on the muddy surface, just as the truck behind saw a gap and raced forward. Fortunately she managed to roll out of the way, but inches from the wheels that would have crushed her. The truck did not stop. Many dear little ladies that day and subsequently found themselves intimidated as in the sketch, by these aliens.

It would take a book to write up all this. If this were happening in Surrey or Sussex where they don’t appear to have a single turbine, there would be a national outcry. We already have hundreds and the scandalous manner in which these speculators accrue vast wealth for trashing the livelihoods, well-being and local tourist economy is shocking. But we carry on the fight, though there’s not much time for painting.

I wish you all a rather belated happy new year, and every success with your painting!

Patchings Art Centre is currently showing a marvellous exhibition of paintings entitled 30 Artists for 30 Years in the Barn Gallery at the centre. This celebrates their 30 years in existence which grows from strength to strength every year, and is the highlight of the year in many artist’s calendar. Their Art Festival in July is the most spectacular art and craft event in the country, and I urge you to pop along and see these works by artists who have exhibited and demonstrated there over the years. You will find the centre in Oxton Road, Calverton, just north of Nottingham – the postcode is NG14 6NU. 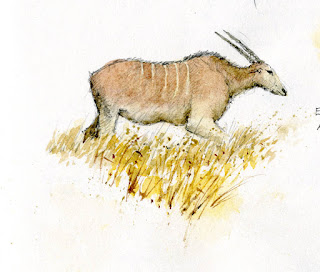 While I was in Kenya I did manage to find a little time to do a short safari to capture a few more animals and birds in my sketchbooks. In this, one of the calmer moments of my entire trip I drew an eland wandering through the grass, adding in the colour later. Much of the time though it wasn’t at all calm, what with monkeys eyeing up my cereal bar – the speed at which they hit you is awesome, and you do rather feel glad it’s a monkey and not something bigger with huge teeth; also rather nasty things lurking in the undergrowth when you go for a wander to stretch your legs……yes, wildlife is absolutely fascinating!

Many thanks to all of you who sent good wishes for my recovery – it was really nice of you, and you can be assured that I’m now fully back to standard mischief-making status. Enjoy your painting, and do come and see me at Patchings in July – it’s a great occasion!

After a week of absolutely atrocious weather in the Italian Dolomites it’s nice to be back in sunny Wales for a day or two. Although I managed a number of useful sketches, without any views because of dense mist and lashing rain for much of the time it was a little annoying, especially when you know the scenery is spectacular. The previous week at Lake Garda we suffered from intense heat during a group painting holiday, but everyone remained cheerful, kept painting and put up with all that sunshine. 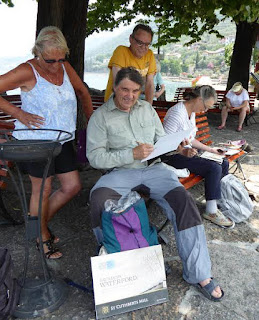 On Monday evening (10th July) I will be giving a talk at the launch of my Arctic Light book at Stanfords Map Shop in Covent Garden, London. It’s a fabulous place for maps and guidebooks for all over the world. There are still a number of places left, and if you wish to come along, then please get in touch with Mary Ellingham at Search Press on 01892 510 850, or marye@searchpress.com

Although Arctic Light it is not a how-to-paint book, it is crammed with watercolours and sketches with a great many examples of the way atmosphere and light can be depicted in landscapes. This time I have also included many works showing wildlife, both animals and birds, which can make a real difference to a painting even if portrayed in a small scale within the composition. You can see more details at my website.

Next week I shall be demonstrating for St Cuthberts Mill at the annual Patchings Art Festival on the Thursday, Friday and Saturday, using the marvellous Saunders Waterford papers in the St Cuthberts Mill Marquee. The festival is on from 13th to 16th July inclusive and is highly recommended for its wealth of demonstrating artists, crafts and art materials, so do come along and have a chat. For further information on the event see Patchings Art Festival. We will also have a stand near the marquee with a number of my paintings, books, DVDs, etc, so hopefully I’ll see you there.