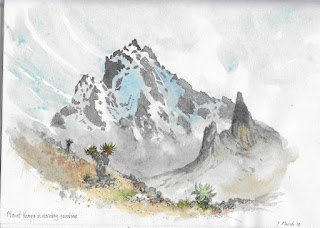 If you really want to give your landscape paintings a boost one of the most effective methods is to inject a strong dose of atmosphere into the scene. Unfortunately most of the time when you sketch or photograph a subject there may not be much by way of atmosphere, so in many cases you need to inject it into quite an ordinary scene. With time and experience this becomes easier. 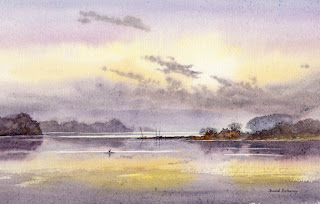 In this view of the Teign estuary in Devon you can barely see the distant Dartmoor ridges, and even then they become lost in the atmosphere at the extremities. To achieve this sense of mood and distance I have used the same wash for the ridges as I have for the lower sky area. Keeping most of the edges softened also helps create mood, as does a very limited palette. There is hardly any detail in any of the background trees and promontory, and even the centre of interest – the cottage with its attendant trees has little extra colour.

This painting is part of my forthcoming exhibition Shorelines and Summits at Lincoln Joyce Fine Art, 40 Church Road, Great Bookham Surrey, KT23 3PW – telephone 01372 458481  Their website is www.artgalleries.uk.com  The exhibition runs from 28th October to 7th November. Both the coastal and mountain scenes include strong atmospheric effects in most cases.

There are still places available at my seminar which takes place from 10 am to 3 pm on 28th October in the Old Barn Hall opposite the gallery, so you can also view the exhibition. Tickets are available from the gallery or Clockwork Penguin or telephone 01982 560237 The seminar comprises a watercolour landscape demonstration and an illustrated talk, both covering how to include animals and wildlife in your paintings – and, of course, lots of atmosphere, and you will have the opportunity of asking questions. I hope to see you there. 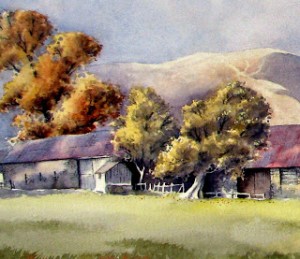