Where I live we are blessed with countless streams and waterfalls tumbling down the hills and mountains, and I like nothing better than to wander beside a mountain stream with sketchbook, well away from the hurly-burly of life. One mountain stream is worth far more than a thousand mental health quacks for our well-being. In my short demonstration painting last week on the Shopkeeparty site I painted a mountain stream on a misty day, as seen below, and on Thursday 13th will be doing a much longer, more considered workshop on the site.

In the painting I aimed to lose much of the mountain and its detail in background mist, using the wet-in-wet technique, pulling out some of the colour on the left-hand buttresses with a damp brush to suggest light catching the boiler-plate slabs of rock. This was accentuated when the paper had dried by painting in the left-hand buttress which contrasts the softer-edged wet-in-wet approach used on the right-hand one. The central group of conifers was also painted wet-in-wet so that a real sense of distance was created when the dark-tones trees on the left were added. Notice on the cascade how the rocks are placed with hard edges at the tops and soft ones where the rocks rise out of the tumbling water.

Next Thursday at 3.30pm I will be running a 2 to 3- hour workshop on painting a waterfall with sunlight and autumn colours, and you are welcome to join me. I shall be showing you how to tackle many fascinating features:

You will find further information at  Workshop: Autumn Waterfall with David Bellamy (shopkeeparty.com)
I shall look forward to seeing you then.

As landscape painters why are so many of us obsessed with bottoms? Why do we feel the compulsion to describe everything in minute detail? It’s not necessary and in fact detracts from the overall effect in a painting. 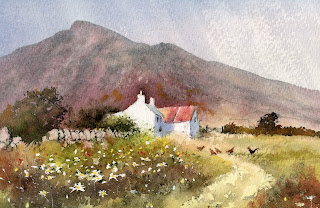 I have cut out some of this composition so that we can get in closer to view the relevant bits. Note the drystone wall on the left, the white walls of the buildings and the small gate immediately to the right of the barn, and how I have not rendered a definite bottom line in each case. By omitting this I have endeavoured to make the effect more natural. Usually I only paint in the top two or three bars of a five-bar field gate. You can see that for the right-hand hedgerow I have indeed given it a fairly distinctive bottom, probably a minor aberration when I was desperate for coffee! It’s not a great problem as it is in the distance and the bottom part of the hedgerow could be softened off with a damp brush.

So watch those bottoms as you’ll get a more natural effect if you keep them soft. Hard boundary lines around a feature can make it look cut-out, rather like a garish sticking plaster on a donkey’s ….er, bottom.

The watercolour was painted on the fabulous Saunders Waterford 200lb rough high white paper in order to make the most of the textures on the hillside.

It’s some time since I found time to write a blog post – having to work on the studio, being away from home and a recalcitrant computer with an impossible broadband service has made it difficult. The sun is beating down outside and the spring flowers are rife, a marvellous time to be out sketching, so maybe when I finish this post I’ll get some fresh air. 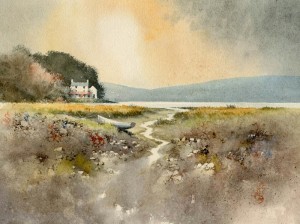 My subject today is Dylan Thomas’s Boathouse  where he wrote his poetry. In this case I have designed the composition so that the foreground plays a major part, covering at least half the area of the painting. This has allowed me a rather long lead-in where I’ve elongated one of the ditch-like creeks and let it fade into the immediate foreground. With so much foreground space there is a danger that it could be severely over-worked, so I have made the detail intermittent, gradually losing it lower down as a vignette.

I began rendering the foreground by drawing in the shapes of stones in outline with a fine rigger brush, varying the colour with burnt umber, light red and ultramarine. I then washed a medium tone of French ultramarine and light red over the area, avoiding the stream and light stones, working very quickly with a number ten sable, not worrying if I covered some of the stone images, and losing the edges of others where they were still wet. While this was all wet I dropped in other colours, mainly yellow ochre, and then let the painting dry. Finally I drew in further stones with the rigger – these are the ones that stand out more prominently. I also added touches to some of the light stone shapes to make them stand out.

This painting is now on display with others at Art Matters in their White Lion Street Gallery in White Lion Street, Tenby in Pembrokeshire. Their telephone number is 01834 843375 if you wish to get in touch, and their site is www.artmatters.org.uk  Enjoy your painting and make sure you give those foregrounds plenty of consideration before you decide on the final composition. Don’t be afraid to make them a significant part of the painting, and not just an after-thought.

In a painting, when you overstate detail you will detract from the impact the work imparts on the viewer.  The answer is to simplify matters by leaving out much detail and lessening the effect of what remains in what we call a ‘lost and found’ method. This technique is seen quite clearly in the section of a painting of the wall at the home of Witch Coarsecackle, as illustrated below: 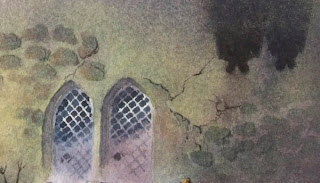 The stonework is only revealed in places, and by washing a transparent glaze over it the otherwise stark edges of the stones have been softened. Also note how the window has been rendered, losing strong detail lower down to stop the whole becoming rather boring. I used the negative painting technique here, but masking fluid might well have been an easier technique. Ignore the rather strange-looking creatures in the top right-hand corner as they add more to the narrative than to the aesthetic appreciation of the lost and found method.

You will find the ‘lost and found’ method featured in all my art books, but for further information on Witch Coarsecackle and her amazing abode you can check out The Grog Invasion on my website. It is the first book of the Chronicles of the Llandoddies, the legendary water-folk of Llandrindod Wells, and a great tonic for those who need a good laugh and escape from the realities of modern life, aimed at kids from 9 to 99. Coarsecackle is herself a portrait artist of some renown and a film on her methods is under preparation.